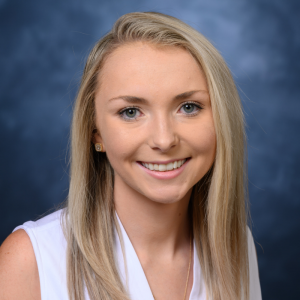 I’d like to sincerely thank all of the sponsors that donated towards this scholarship fund. I’d also like to thank the entire Targeting Excellence committee and board for reviewing my application and providing such an incredible program to students with a passion for agriculture. Veterinary school is very expensive and this scholarship helps alleviate some of that burden, which means so much to me. I can’t thank you enough.

A previous internship at a large animal hospital in rural North Carolina influenced me to pursue a career as a mixed animal veterinarian in a rural county. My goal is to do at least 75% food animal work in these areas. By driving over two hours to appointments due to a lack of food animal veterinarians, I observed the high demand for veterinarians stationed in rural areas and developed a desire to help remedy such a common problem. Working on multiple species and applying for the USDA?s Veterinary Medicine Loan Repayment Program will allow me to better support myself financially in these underdeveloped areas, although it will still be a low paying career choice. After completing thousands of hours of clinical experience alongside a veterinarian with small animals, livestock, and exotics, I strongly believe that I have the experience necessary to prepare me for this career. I have assisted with small animal surgeries, including limb amputations and splenectomies, as well as learning the best preventive medicine practices and small animal illness treatments. Through working with large animal ambulatory veterinarians, I have learned how to properly stock a truck for a full day, store temperature sensitive vaccines, and schedule appointments to minimize driving. These hospitals allowed me to participate in late night and weekend emergency calls, allowing me to learn advanced clinical skills, such as large animal rescue protocols and relieving colic. A career in mixed animal practice will truly allow me to improve the lives of both humans and animals in an underserved area, but I have unfortunately also observed how draining this job becomes on veterinarians. Some days will be very long due to the lack of immediate veterinary care in certain areas. To help with a large caseload and long hours, my goal is to join an existing practice so that I can help current rural veterinarians while also having a support system. Long term, my goal would be to take ownership of the existing practice. I would prefer to practice in eastern North Carolina since my family is from that area, which would provide additional support. Likewise, eastern North Carolina has many rural areas and experiences catastrophic effects from hurricanes on a yearly basis. Between helping farmers keep their animals healthy so that they can achieve financial stability and keeping companion animals healthy so that their owners can enjoy all of their benefits, I will be a vital addition to the veterinary field and to rural communities by working in underserved areas where there is a national shortage of veterinarians.