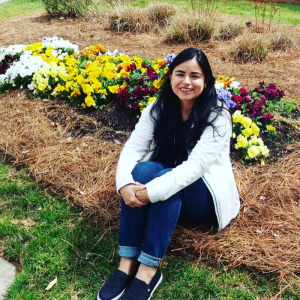 Thank you to the sponsors of targeting excellence for this scholarship! I feel very happy and grateful to be part of the 2020-2021 winners. Your help and support mean a lot to me that I can not put it in one word. I hope you keep supporting the new generations of students like me, who want to pursue a better future and contribute to our noble profession of agriculture.

I chose to answer this question because I strongly believe in animal production. My passion for animal production has greatly increased as I had an opportunity to learn throughout my student career and had the opportunity to interact with consumers that generally do not understand where their food comes from. As professionals in the animal industry, we all are closely tied to consumer desires and their perceptions. This can be observed from many different aspects, from enhancing animal welfare and health (the most common and important for the consumer), decreasing environmental foot print and global warming, and providing safe and affordable protein to a rapidly growing population. From the producer point of view, the goals and objectives are very similar to those of the consumers. Furthermore, the economics of production and maintaining profitability without compromising the performance of the animal is obviously important. To give a few examples involving both views, I would like to mention examples involving diseases, such as PEDV, PRRS, and ASF. These are directly related to animal welfare, health, and food safety. But, they are also related to significant economic losses for producers. In addition, consumers hearing the news about ASF, for example, become more sceptical about consuming animal products in their daily meals. This consumer perception is the major driving factor responsible for directing the animal industry to seek renewed production systems. People within the pork industry have made tremendous progress in improving production efficiency and reducing the environmental foot print. For example phytase is widely used to reduce phosphorus excretion (30 to 50%) to the environment. Reduction of crude protein by the use of synthetic amino acids, formulation of diets based on ileal digestible amino acids and net energy, inclusion of fermentable fiber in diets are strategies to reduce nutrient excretion, ammonia emissions and odors, while optimizing economic return. Methods to achieve a more sustainable production such as inclusion of insects as protein and energy sources are currently receiving much attention. Incorporation of additives such as enzymes can enhance fiber digestibility in animals and take advantage of its nutrient profile, allowing incorporation of feedstuffs that otherwise have limited value. Hunger control in limit-fed pregnant sows is a welfare and behavior topic that has gained popularity in Europe and America. All of these examples address, in part, consumer’s opinions and concerns. These examples are supported with scientific background in which we must understand the mechanism of action of nutrients of feed ingredients in the animal. The scientific community has the noble task to transmit this information not only to the public in general, but also to the producer who will have the opportunity to apply new information and technology to improve profitability of their business. I would like to include a couple of examples directly related to my student career. During my internship period I was able to help in a successful study where betaine was evaluated as a metabolite to reduce heat stress in lactating sows during the summer. My master thesis was to evaluate an alternative protein source to partially replace spray dried animal plasma in nursery pigs (the source was yeast hydrolysate). In a subsequent study, with positive outcomes, our laboratory evaluated the inclusion of Black Soldier Fly Larvae (Hermetia illucens) meal as a sustainable protein source for nursery pigs. I suggest that all these studies have been encouraged by consumer perception in an effort to produce safe and affordable food. We are facing a generation that is more aware of the care of the environment, a generation that wants and needs to know how the meat it consumes was produced. It is important that the animal was treated according to established welfare standards, that had the necessary conditions to live, and that the ingredients used for its food were 100% safe. Although public opinion often makes erroneous assumptions and statements regarding animal production, it is that lack of understanding that has motivated me to keep up to date with new knowledge that represent a viable alternatives for a sustainable production. Public opinion is something that we will always have deal with and that is why the new generation of students like myself, must find effective methods to communicate the many positive advances in animal production that we have made and will continue to develop in the future We should consider consumer desires, concerns, and perspectives as an opportunity to never stop improving and innovating our production system. I am excited for the opportunity to be a part of this incredible industry.